"(A) collective of anarchist and radical libertarian activists based around the Bath area and its satellites, committed to bringing about positive change in our lives and beyond. We operate without hierarchy or leaders, and are against all forms of exploitation and oppression, particularly the bosses and govermint. Remember, kids: Capitalism is Chaos, Anarchy is Order."

See the link below:

COMING SOON: A Bath Bomb near you...

The Bath Bomb had unexpectedly shut down over the summer due to a journalists' strike, but the editorial collective is confident it will have knocked the rabble back into order in the very near future.

so expect something from us very soon, and sorry for the continuing disruption to our service.
Proof that when things are free, you get what you pay for.
Posted by THE BATH BOMB... at 11:34 2 comments:

Got any positive, funny or random stories from your squatting experiences?

We're putting together an exhibition and zine with positive squatting
stories to contradict and show the other side to squatting, to the one
regurgitated again and again by the mainstream media.

Wherever you squatted, be it Brixton or Kurdistan, or whether you squat
now or you did in the 70s, any positive stories are welcomed -- the more
varied in time & place the better. Some of the stories we have so far
include from after the second world war when families took refuge by
squatting abandoned army barracks, as so many homes had be bombed in the
blitz, as well as some stories of how newly arrived Asian families to
Britain gave up the council housing they had received to squat together in
empty estates to avoid the racial abuse they were suffering.

Any good pictures you might have that can accompany the stories would be
brilliant too. Also, if you have pictures of transformations you've made
turning a destroyed building into a beautiful home, they would also be
really appreciated. Of course you can be completely anonymous from
anything you contribute.

Defend Our May Day!

Defend Our May Day!

As well as its roots in folk history and pagan festivity, ever since the struggles of
the Haymarket Martyrs of Chicago in 1886, the May Day festival has long been a
celebration of workers' power. Even though the rich and powerful would like us to
believe that they have graciously handed us our every freedom, the truth is far
different. Whether it's laws to protect people in their jobs, universal suffrage,
equality, environmental protection, the welfare state or whatever limited
democracy we still have, it's us – or those who have come before us – that have
had to fight and win those rights, wrestling them one by one away from those
would rule.

Now the Con-Dem coalition have announced plans to scrap the May Day bank holiday
and relocate it to the autumn as 'Trafalgar Day'. Yet there are already far too many
religious, military, rich or royal figures that we are forced to revere; May Day is one of
the few days celebrating the achievements of ordinary people, and our self-styled
leaders want to take it from us. It seems that in a time of united struggle against the
cuts, and of re-emerging ideas of people power, that this is a move to try and erase any
memory that the common people have ever won anything.

So, to defend our history, Bath Trades Council, the Bath Anti-Cuts Alliance and others
will gather on Saturday the 30th May, from 11.30am, outside Marks & Spencers at the
bottom of Stall Street. Why not join us with banners, placards and leaflets?
Remember: the powerful give nothing up willingly, and neither will we.

e-mail: bathagainstcuts@yahoo.co.uk
www.bathanticutsalliance.blogspot.com
Posted by THE BATH BOMB... at 11:53 No comments:

In 1649 and the close of the second English Civil War, Britain came very close to being great, with the beheading of Charles I – the best cut of all! However, since Cromwell and his ilk then betrayed all our ancestors' hard work and reinstalled the monarchy, things went down hill from there.

Now, 361 years later, the British public are still being robbed and subjugated to feather these inbred parasites' nests. Figures are difficult to ascertain, due to a shroud of bureaucracy, laws and misinformation, but best estimates place the Windsors' annual expenses and allowances at a figure around £40-50 million. Making a mockery of any concept of democracy, the Battenberg/Windsor family have been granted positions of heridatory government, even though we've never once voted for them and they know nothing about life for ordinary people, or display any competence. This nation's history is a sad one of being invaded and invading others, and the Royals are a blatant reminder of that shame, an everyday symbol of a brutal past and decadent present; whilst we struggle to make ends meet, they flaunt their ill-gotten wealth, with 'Her Majesty' even going so far as applying to the Community Energy Fund back in Autumn, to lessen their heating costs. It seems their soul purpose is to give tourists a good chuckle over our medieval ways, and to clog up our newspapers and airwaves with bushels of yet more useless celebrity trivia pap.

Even if we can't enjoy the sight and sounds of “Off with their heads”, let's at least strip these scroungers of their titles and privilege, and put them to work like the rest of us.

Yet now, they're really taking the piss! Whilst an unelected government Con-Dems us to a £60 billion plus program of easily avoidable cuts – a politically-motivated attack against anyone who's not from Eton – we are now expected to shell out a further £80 million on Royal Wedding security. But could the spectacle of the happy couple's 'special day' actually be a smokescreen, cynically arranged to distract us from the savagery of the Coalition's class war antics?

So, instead of gawping at the box on Friday the 29th April, why not join us in Royal Victoria Park (oh, the irony!) in Bath, for a Picnic Against Parasites! Meeting at the war memorial at midday, please dress for the occasion, and bring food, drink, music, friends and banners; oh, and the odd effigy to burn, too.
Posted by THE BATH BOMB... at 08:33 1 comment:

Bristol Anarchist Bookfair on its way 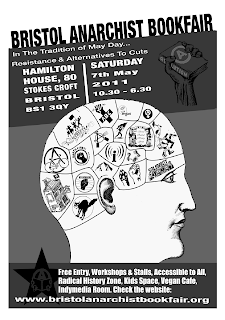 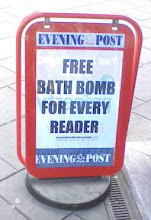